The danger of character evidence is that the factfinder will convict the defendant because they are a "bad person" or that they have committed similar crimes in the past rather than focusing on the prosecution's burden to prove the case against the defendant.

A criminal defense lawyer should always remember that evidence of bad acts are only relevant if they actually occurred.[1]

Under Federal Rule of Evidence 404 "Evidence of a person's character or a trait of character is not admissible for the purpose of proving action in conformity therewith on a particular occasion."[2] Such evidence may be offered for several other reasons:to prove motive, opportunity, intent, preparation, plan, identity, absence of mistake or accident.

Although character evidence and similar crimes evidence is generally inadmissible, a number of exceptions have been recognized over the years. These were later codified in section B of rule 404.

Evidence offered under one of these exceptions must still be analyzed to determine whether the probative value outweights the prejudicial effect of the evidence. Rule 403. Because a genuine issue can usually not be identified until after the defense presented its case, 404(b) evidence is typically offered in rebuttal.

Evidence of bad acts are only relevant if they actually occurred. In Huddelsteon v. United States, the United States Supreme Court held that in order for character evidence to be admissible at trial, a judge must make a preliminary determination that there is 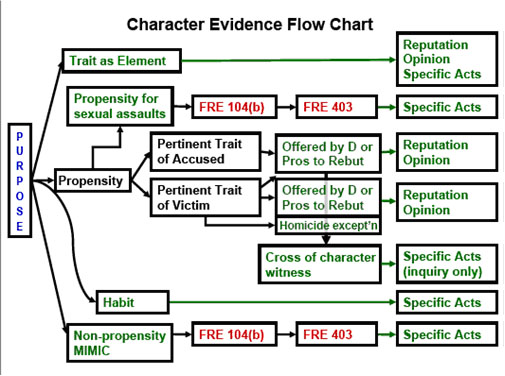